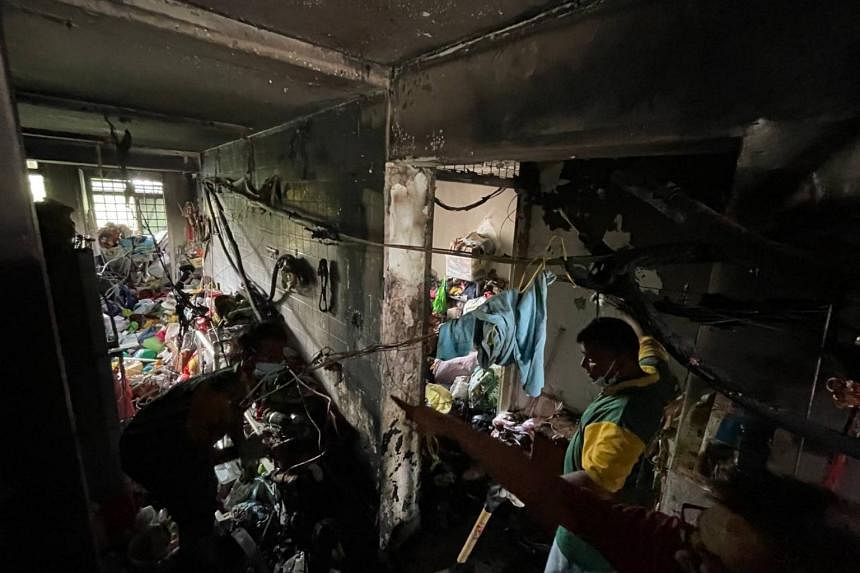 The SCDF said the fire was contained to the living room, although other parts of the unit sustained heat and smoke damage.

He reminded the public not to leave lit materials such as candles, tealights and incense sticks unattended and to extinguish them before leaving the house.

Potong MP Pasir Sitoh Yih Pin said the city council would provide Ms Teo with financial assistance from a fund it set up for the purpose to tide her over in the short term.

He said the debris should be completely cleared by Friday evening.

Madame Kok Ah Soon, 90, who lives two units away from Madame Teo, said she was still sleeping when neighbors knocked on her door to wake her up just after 7 a.m.

She said three firefighters walked her downstairs and told her to hold her breath as she walked past the burning unit, so she wouldn’t inhale the fumes.

“One minute I was sleeping and the next I heard a lot of frantic knocking on my door. The only thing I was worried about was not having time to take my dentures since they are very important for me,” she said.

Another neighbour, who wanted to be known only as Mr Loo and refused to give his age, had slept through the fire as his apartment is down the hall and quite a distance from Mrs Teo’s unit.

“I didn’t realize there was a fire until much later this morning. The smell of smoke is still quite bad, even though it’s been a few hours,” he said, as he left the apartment to get some fresh air.

When the Straits Times contacted Potong Pasir City Council for information about residents having trouble with the amount of clutter in Ms Teo’s apartment, a spokesperson said the City Council was not able to comment on the matter.

On Tuesday, an apartment in Jurong East caught fire, killing a 48-year-old man, before starting to burn again a day later, likely reignited by deep-rooted embers in the debris. A neighbor said the owners of the affected unit used to leave items, such as appliances and bags, in the common hallway.