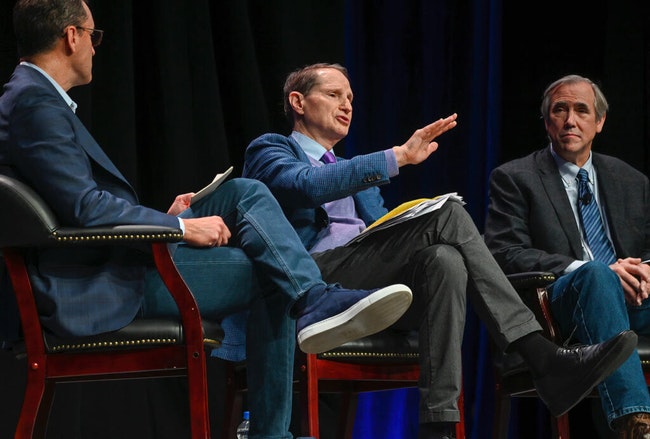 After a decade of work, Wyden seizes the opening to advance climate change finance

The moment for US Senator Ron Wyden has come after a decade of politics and patience, seasoned with science.

The US Senate on a Sunday afternoon in early August passed what has been described as the nation’s biggest investment in energy efficiency.

Wyden had been nursing his Clean Energy Act for America for years and now it was the law, part of the massive Inflation Reduction Act.

As he left the Senate on August 7, one of the first to congratulate him on the achievement was President Joe Biden, who reached Wyden on his cellphone.

“He was so kind, so grateful,” Wyden said in a recent interview. “He knows the real key in the Senate is persistence, being upfront with people and getting the facts.”

Energy legislation relies primarily on tax credits for businesses and consumers who invest in everything from factory upgrades to appliance upgrades.

“This is the biggest climate change investment in American history,” Wyden said.

“Nobody knows what the carbon reducers will be in 10 years.”

The path of passage shows how the internal mechanics of Congress, and in particular the Senate, can still result in action. Most public attention in the modern era focuses on the bitter divisions between Democrats and Republicans in the Senate and House.

But it was Democrats who condemned early work on climate change legislation.

The Senate sits on legislation

In 2009, the House passed the American Clean Energy and Security Act, considered the primary climate legislation. But the bill went to the Senate and died of neglect.

Wyden, who began serving in the Senate in 1996, said the legislation hit conservative and moderate senators as too punitive — “too heavy of a hand.”

From his seat on the Senate Energy and Natural Resources Committee, Wyden believed that the only chance for meaningful energy legislation was to “drop the sticks and pound people.”

Wyden said it was going to take a new political coalition to push for climate change legislation. This required building on respected climate and energy science. But it also required moving away from a focus on a specific technology, which in the past meant that some industries were favored by federal benefits and others weren’t.

Instead, Wyden said, federal policy should be “technology-neutral.” The intention was to reward any business or consumer that reduced their carbon emissions. How they did it would be less important.

The notion appealed to Wyden because it supported invention.

“Nobody knows what the carbon reducers will be 10 years from now,” Wyden said.

In 2012, Wyden received an invitation from someone who, a decade later, would be crucial to the passage of the Clean Energy for America Act – Senator Joe Manchin, Democrat of West Virginia.

This culminated in a visit to coal mines, wind farms and hydroelectric power stations over a summer weekend.

“I haven’t seen anyone in West Virginia in the past two days who wanted to plunder and ravage their wonderful land, air and water,” Wyden said.

But the tour also gave Wyden time to discuss energy policy with Manchin.

“That’s when I started talking to him about how we’re trying to find a way to bring people together” on ways to reduce carbon emissions, Wyden said. “What do you think it’s going to take to break the ice here?”

In 2015, Wyden was ready and introduced the first draft of its Clean Energy for America Act. Progress stalled until the election of Biden, a supporter of climate change action. Wyden said he saw his chance when the Biden administration took hold in early 2021.

“In public service, if you work hard and prepare, keep your eyes open, look for an opportunity, you can be successful,” Wyden said.

With Democrats in control of the House and an evenly divided Senate, Wyden pushed forward climate change legislation.

“I said to my colleagues: ‘Now is the time.’ They accepted,” he said.

He said ‘more than a decade of sweat equity’ has paid off as the Senate Finance Committee he chairs held hearings on the bill and moved the bill forward. in May.

“The American people know the climate crisis is an existential threat and strongly support bold action,” Wyden said in a statement after the vote.

The proposal was incorporated into the Inflation Reduction Act, which appeared to be on its way to being approved and signed into law by the Senate.

Then, “It looked like everything was going to fall apart. “We don’t give up,” I kept telling everyone. We will never have a better chance of doing so.

Manchin, a key vote for tied Senate Democrats, stunned his colleagues, telling them on July 14 that he could not support the broader package. Two weeks of negotiations by Senate leaders followed, and Manchin became a “yes” vote. The final vote included approximately 90% of the 2021 version of the Clean Energy for America Act.

“The Russian coast tour was not for the faint of heart,” Wyden said.

JUST THE FACTS, FOR SALE – We report on your community with care and depth, fairness and accuracy. Receive local news that matters to you. Subscribe to Salem Reporter from $5 per month. Click on I want to subscribe!