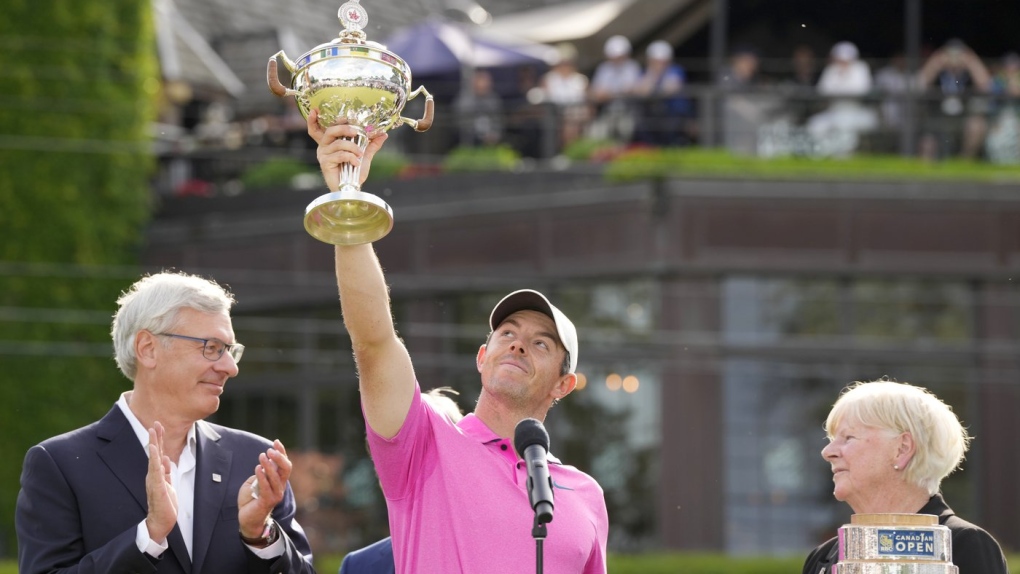 
Rory McIlroy just has to fill out the paperwork and then he’ll be an honorary Canadian.


The Northern Irishman shot an 8-under 62 to win his second RBC Canadian Open with a two-stroke victory over Tony Finau of the United States to finish at 19 under overall. McIlroy has been adored by Canadian fans all week, with fans chanting his name all over the 72 holes.


“If I were granted honorary Canadian citizenship, I certainly wouldn’t refuse it,” McIlroy said with a laugh, the Canadian Open trophy sitting beside him.


“It would be a very proud thing for me. But no, I’m happy to come here once in a while and play golf and take that trophy south of the border with me.


McIlroy also won the 2019 Canadian Open at Hamilton Golf and Country Club, his first ever professional event in Canada. The men’s national golf championship was canceled in 2020 and 2021 due to the COVID-19 pandemic, making McIlroy a back-to-back champion – albeit three years apart.


Because the forecast called for thunderstorms, the final round of the Canadian Open had groups of three from the first and ninth tees.


McIlroy was with Finau and American Justin Thomas, who both threatened his lead in the third round. Finau drained a birdie putt at 18 to finish two strokes behind McIlroy and Thomas was four strokes behind the winner.


“Super happy to defend, even if it doesn’t feel like defending because it’s been so long,” McIlroy said. “And then just to play in a final group like that with that vibe all day. I mean the fans here this week have been absolutely amazing.


Fans rushed to the fairway at St. George’s Golf and Country Club after McIlroy, Finau and Thomas arrived on the 18th green. Security guards and police had to hold off the crowd as McIlroy sank a four-foot putt for a birdie to seal the win.


He said the influx of spectators reminded him of Tiger Woods’ victory at East Lake in Atlanta in 2018. McIlroy was in the last group that day and said the feeling was comparable, even though he was this times the center of attention.


“It was pretty noisy there, but it’s really cool,” he said. “Whenever that happens and you can enjoy your ride and you know you have the tournament sewn up, you can take it and really savor it and enjoy it.”


Corey Conners of Listowel, Ont., won the Rivermead Cup as the lowest-scoring Canadian professional at the event. He shot an 8 under 62 to finish at 12 under and take sixth place.


England’s Justin Rose shot a 10-under 60 for the fastest round of the tournament. He said he was disappointed to miss a 59 even though he was happy with his fourth place overall.


“You really only play the last hole – I’ve never shot 59 before – so that would have been a nice footnote to the week,” said Rose, who suggested he might have chosen the wrong club on the 18th hole. “I don’t know how many were under my control or not.”


The start of the tournament was overshadowed by several high-profile players who left the PGA Tour to join new rival LIV Golf Invitational.


The Saudi-backed league is led by Greg Norman, who has 20 career PGA Tour wins. It held its inaugural event at the Centurion Club outside London, England, from Thursday to Saturday in direct opposition to the Canadian Open.


“I got extra motivation from what’s happening across the pond,” McIlroy said. “The guy running this tour has 20 PGA Tour wins and I was tied with him and wanted to get one ahead of him. And I did.


“So that was really cool for me, just a bit of pride for that one.”


This report from The Canadian Press was first published on June 12, 2022.