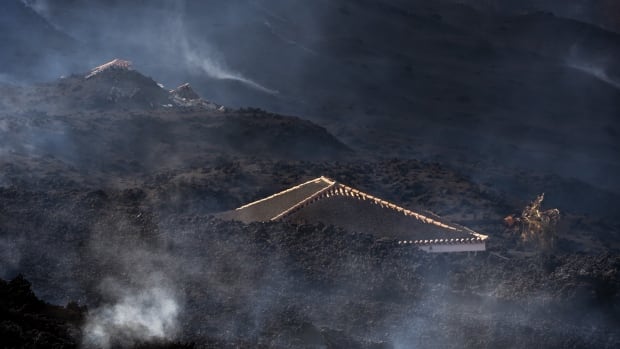 Families rushed to collect their belongings from homes and escape a lava flow from a nearby volcano on Tuesday on the Spanish island of La Palma, creating traffic jams on some of the narrow roads in the town of La Laguna.

Lava has been seen flowing west to the coast in three huge tongues, incinerating everything in its path, including a school, although no fatalities or injuries have been reported.

Lorena, a 42-year-old La Laguna resident, ran to collect furniture and electrical appliances from her parents’ house in the city.

“We’re nervous. We take out the most essential things like mattresses, the refrigerator,” she said, with her family’s belongings strewn around the yard.

The city was evacuated on Monday, but rescuers gave residents a two-hour window on Tuesday to return home and save whatever they could.

Families in the Spanish town of La Laguna rushed to evacuate their homes, fleeing lava and smoke from an erupting volcano on the island of La Palma. (Credit: Reuters / Borja Suarez) 0:40

Almost a third of the population in the affected areas work in the banana industry, a producers’ association said.

The largest lava flow was advancing towards a banana plantation and water reservoir as it neared the main street of La Laguna, moving at around 200 meters per hour, authorities said.

“It’s not a joke,” said Pedro Jose Alegria, 70, a farmer who had returned to La Laguna to feed his donkey.

Speaking from an ash-covered van, he said he feared for several of the greenhouses he owns in a banana plantation that overlooks the Atlantic Ocean.

Alegria’s immediate concern is that the lava is destroying the intricate piping that powers the plantation’s sprinklers. But there are also fears that volcanic activity may render groundwater unusable for consumption as well as for water-intensive banana cultivation.

An active volcano in Spain’s Canary Islands creates rivers of lava that engulf homes and even swimming pools as it winds its way out to sea. 0:50

“The volcano may not kill us directly, but it is going to go bankrupt for many of us,” Alegria said of the lava that began to flow through the island’s countryside after Sunday’s eruption. .

Despite the limited arable land in La Palma, agriculture is the island’s main source of income. Bananas are the jewel of the industry: nearly 3,000 hectares are planted with bananas, which employ more than 10,000 of the island’s 85,000 inhabitants.

Between 5,400 and 7,200 tonnes of bananas are shipped each week from the island to the Spanish mainland and elsewhere in Europe.

In the early hours of Tuesday morning, several small earthquakes rocked the island off northwestern Africa, leaving nerves on edge.

Officials said a river of lava was also sweeping down the town of Todoque, home to more than 1,000 people and where emergency services were preparing for evacuations.

So far, around 6,000 people in La Palma, part of Spain’s volcanic Canary Islands, have evacuated their homes and 183 homes have been damaged, government spokeswoman Isabel Rodriguez said after a cabinet meeting in Madrid. .

The head of the regional government of the Canary Islands, Angel Victor Torres, said the authorities would ask for financial assistance from the European Union to help with the reconstruction.

He said the damage already amounted to well over 400 million euros (C $ 600 million), which qualifies the archipelago for emergency EU aid.

Lava’s pace seems to be slowing down

Authorities said the pace of the lava’s advance appeared to have slowed and did not expect it to reach the sea until Wednesday at the earliest, Spanish private news agency Europa Press reported.

When it reaches the Atlantic Ocean, it could cause explosions and produce clouds of toxic gases. Scientists monitoring the lava measured it at over 1,000 ° C.

Scientists say the lava flows could last for weeks or months. The volcano spat out between 7,260 and 9,525 tonnes of sulfur dioxide per day, the Institute of Volcanology said.