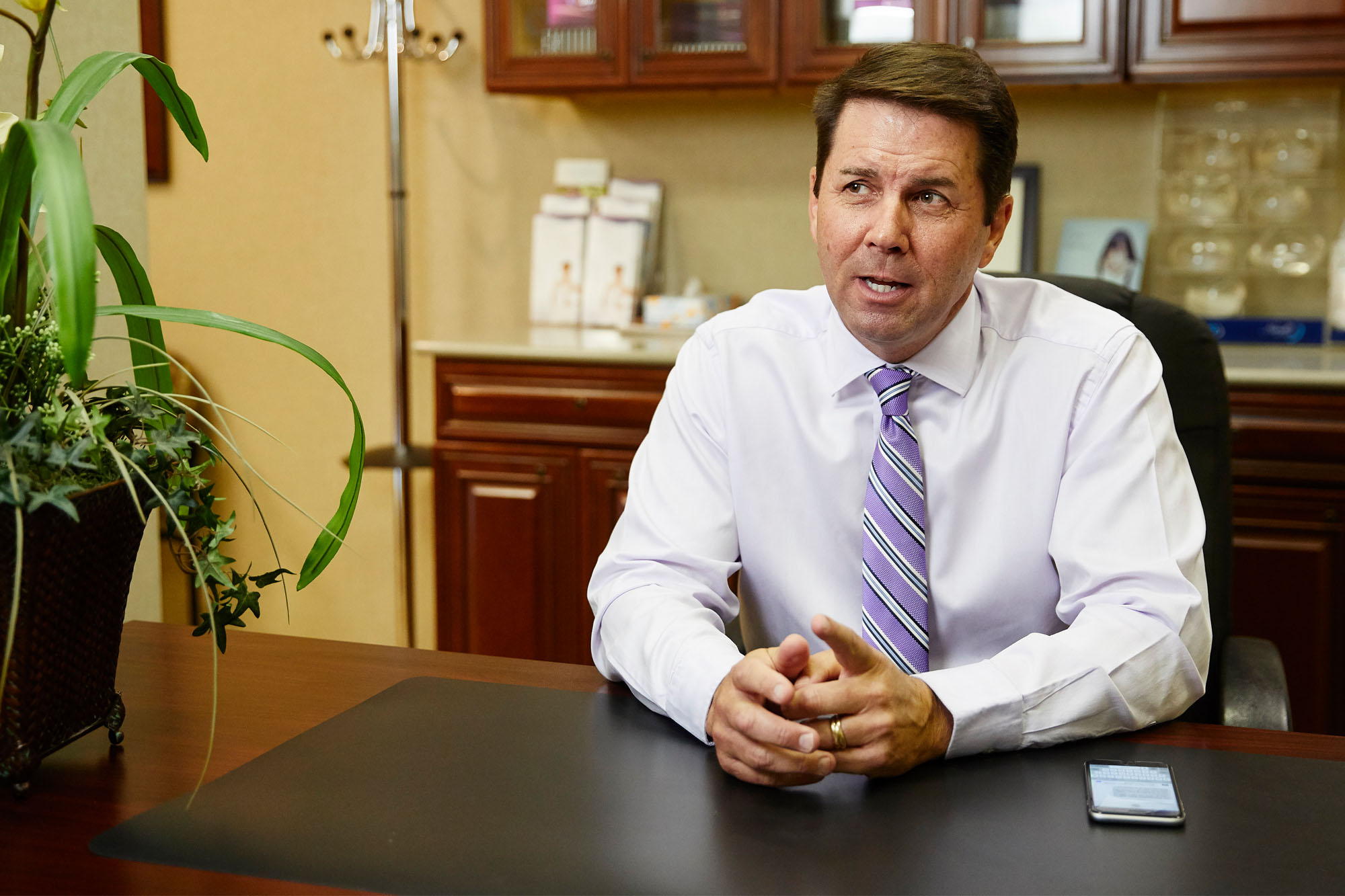 For 30 years, Paul Joncich, now head of media relations at the Kirk Kerkorian School of Medicine at UNLV, worked as a broadcast reporter for television stations in California, Colorado, Arizona and in Ohio before taking over in 2012 as the 12 and 4 afternoon presenter in Las Vegas on KLAS-TV, CBS.

The youngest of five children, Joncich was born in Southern California. His father, an electrical engineer, eventually set up his own business manufacturing precision measuring devices. Joncich says his mother, a housewife, has done a “wonderful job taking care of the family and keeping her kids online.”

In his youth, Joncich, now a fitness champion who plays for the National Adult Baseball Association and the United States Tennis Association, says that growing up he “always played ball.” One day, he was shooting basketball at a backboard attached to the roof of the garage his father built from plywood, and the next day he was playing football on the lawn with the neighborhood kids.

He also spent “countless days” catching a tennis ball and throwing it against the garage door of the family home. Joncich says the sound “bam, bam bam” “must have been obnoxious, but my parents never complained.”
In high school, he played the quarterback on the football team and the shortstop on the baseball team, using the reflexes he had started developing years before in the alley. He earned a baseball scholarship to Loyola Marymount University in Los Angeles, earning a bachelor’s degree in communication arts.

Today, Joncich and his 23-year-old wife, Jennifer, have three children, all of whom are active in sport.

What is your daily baseball and tennis training regimen?

One thing I do everyday is swing a baseball bat. It keeps my hands strong and my back loose. For 23 years, my wife has asked me not to throw it around the house: “PJ, watch out for the dog, you are going to light the lamp.” She says it every time, but so far I haven’t broken anything yet. I also try to lift weights two to three times a week and do push-ups and stretches almost every morning. Usually I play tennis once or twice a week, train with my teammates at Dragonridge Country Club, and play a doubles match on Sunday.

I see great value in sprinting, even as I get older. I feel like it’s so important to keep the coordination and bursting fast. So instead of running around the neighborhood or on the track, I do 40, 60, and 100 meter sprints every now and then. I know it seems a little strange to see an older guy running down the street, and it hurts the next day, but I never want to lose the ability to run as fast as possible. I call it “running away from the bear”. The bear of old age who always nibbles at our heels. In the spring and summer, I also play in an over 35 baseball league. These are mostly guys who played baseball in high school and college. We love the game and always enjoy the competition. My favorite part is staying in the batter’s box trying to beat the pitcher. Sometimes when I stay awake at night I think about hitting a double against the wall. Call me weird, but I love baseball.

Why do you still practice athletics?

I compete because I love to win. Especially in team sports, fighting together and sharing the joy of victory with your teammates. There is nothing like it. The tennis team I play made it to the USTA Nationals in Orlando last month and the baseball team I play with won the NABA World Series in Phoenix for the fourth time this year. These are fun goals to achieve, fight, and review. Training keeps me in shape and I rarely get bored.

During your participation in athletics, any injuries that forced you to stop it for a while?

I always fight against injuries. This year: a sprained neck that hurt so much I couldn’t turn my head to see the traffic, a tennis elbow that made it difficult to even lift a gallon of milk, a pulled quadriceps that hurt with every long stride. Years ago I cut my Achilles tendon while playing touch football and was out of service for a year. I swore to use the time to learn the piano, but the only thing I learned is that playing the piano is harder than it looks. I have also developed a great respect for people in wheelchairs. Pro tip: If it seems like someone in a wheelchair or on crutches needs help opening a door or reaching for an item on the top shelf of the grocery store, go ahead and help them out. …

Why did you choose television journalism as your career choice? Please give examples of stories you are most proud of.

Growing up, I was always interested in the news. At breakfast, I read the Los Angeles Times while listening to KFWB NewsRadio in Los Angeles. In my 30 years of reporting and anchoring there have been so many memorable stories … Early in my career I did a 20 minute live report on the airport runway so that Pope John Paul II was landing for his visit to Monterey, California. In 1991, I was reporting live outside the Good Guys appliance store in Sacramento when bullets started flying during one of the largest hostage operations in US history. It was deeply disturbing to see hostages being shot directly in front of me. I was live on the streets of Cleveland when fans started throwing stones at LeBron James’ huge murals and burning their shirts after LeBron James announced he was “taking his talents” to Miami. I witnessed an execution inside San Quentin Prison and reported in Moscow as they dismantled statues of Communist leaders. Being live as the story unfolded was a rush, but when people ask me if I miss television, I can quite honestly say no.

Why did you decide to get into public relations and more specifically media relations with the faculty of medicine?

When I quit television in 2017, my very first choice was to work for a university because I wanted to be surrounded by smart people, to feel the energy of the students and the rhythm of the academic calendar. I am delighted to have landed at UNLV and to work for the medical school. Honestly, I don’t feel like I’m doing public relations. I feel like I’m working for a cause. Almost everyone agrees that we need more quality physicians in Southern Nevada, so let’s get going.