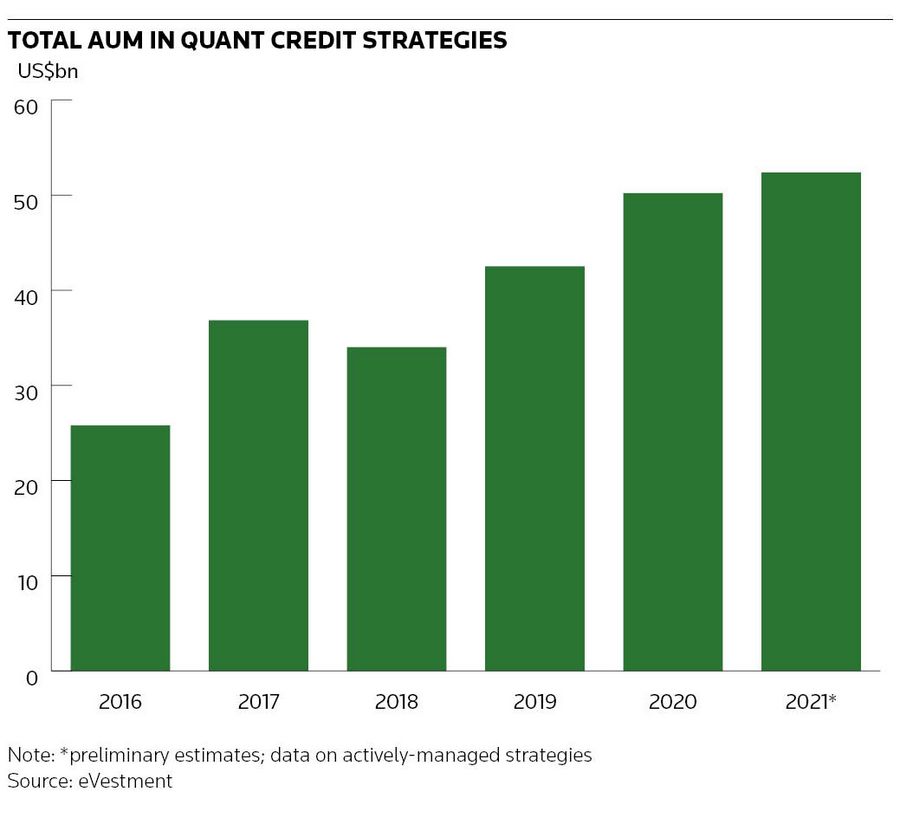 January saw the worst start to the year for US credit in at least half a decade, as concerns about the impact of rising interest rates spilled over into financial markets. It was also exactly the type of environment favored by systematic credit strategies, a small but growing part of these markets that has the potential to revolutionize the stuffy world of corporate bond investing.

“We look forward to volatility,” said Robert Lam, co-head of credit at systematic investment manager Man Numeric. “We tend to have crisis ‘alpha’ behavior – that’s when these strategies have historically performed well. If you are long and short of something, you need the bonds to move in different directions and this increased dispersion tends to really help those types of strategies.

The vulnerability of corporate bond markets to the end of the US Federal Reserve’s extraordinary stimulus certainly doesn’t hurt the sales pitch for quantitative credit, where investors use financial models to identify price gaps on corporate bonds and related markets.

But the drumbeat around systematic credit investing has been building for some time now against the backdrop of a structural shift in the way corporate bond markets are traded and organized towards a pattern more akin to equities. This upheaval opens the door to a new generation of investors determined to shake up corporate credit with the kind of pattern-driven strategies that are now prevalent in equity markets. Assets under management in actively managed quantitative credit strategies have more than doubled in the past five years to reach $52 billion in 2021, according to preliminary estimates from data firm eVestment.

That’s still not a lot in the context of the broader market: these strategies represent about 0.4% of the universe of investable fixed-income securities of around US$66,000,000,000, according to BlueCove, an investment manager based in London. But many believe that greater use of systematic credit investing is inevitable and note that its effects are already being felt, in the form of trend-following funds known as commodity trading advisers that fuel fluctuations in ultra-liquid credit default swap or market-neutral indices. strategies creating sudden ripples in the corporate bond market.

“Systematic CTAs have become an important part of the market in [major US CDS indices] and play an important role in price action,” said Yoni Gorelov, co-head of US credit trading at Barclays. “Last year, we also started to see an acceleration on the corporate bond side. This has had an impact on the technicals of the market at times – some of the quantitative moves in individual bonds have been quite large.”

Quantitative investing has its origins in stock markets decades ago, where hedge funds like Renaissance Technologies and DE Shaw pioneered the use of computers and technology to identify and take advantage of inefficiencies in stock prices. shares. These strategies have multiplied since then and now hold a prominent position in the stock markets, representing about US$10,000,000,000, or about 15% of investable stocks, according to BlueCove.

Many doubted that the male-dominated world of corporate bonds – where the majority of trading still takes place over the phone – could ever make the leap to systematic investing. The markets were considered too illiquid, expensive to trade, opaque and lacking in technological innovation to make this methodological style of investing a realistic goal. Much of this was due to the inherent complexity of the asset class: companies may have hundreds of bonds with different maturities and coupons; they usually only have one stock price.

Paradoxically, it’s these same nuances — along with the fact that the vast majority of credit managers follow traditional investment approaches — that make these markets so prone to disruption, according to quantitative firms.

“We are not looking to remove humans from the process. Rather, the scientific process places humans and technology in the roles for which they are best suited. Humans are good at designing processes; they tend to be generally poor at outright forecasting,” said Alex Khein, co-founder and CEO of BlueCove.

“To run a scientific process, you need data, sophisticated market structure, sufficient market breadth, and research innovations. All of these aspects were present in stock markets at the turn of the century. We have seen all of these key inputs become evident in fixed income over the past few decades, heralding what we believe is a parallel rise in fixed income science opportunities,” he said.

There is no doubt that credit markets have made significant leaps forward in recent years, with developments in algorithmic and electronic trading making it much easier for investors to change their positions in corporate bonds with the click of a button. The proportion of U.S. corporate bonds traded electronically has risen 11 percentage points over the past two years to 37% for investment-grade securities in 2021, according to data provider Coalition Greenwich, while High Yield volumes nearly doubled to 27%.

“The growth of e-commerce globally has been quite dramatic. This attracted more participants and created a virtuous circle, where the data generated by e-commerce makes it easier to research and implement systematic strategies, which in turn generates more data,” said Kevin McPartland, Head of market structure and technology research at Coalition Greenwich.

Yet it would be wrong to suggest that these credit funds closely resemble their peers in the highly computerized world of systematic equity investing. Quantitative credit specialists note that although their approach is primarily data and research driven, humans still play a central role in reviewing the results of all models and then attempting to put the results into practice as consistently as possible. possible. This can always involve picking up the phone to make a trade, especially when the markets get choppier.

It’s “not a black box where a computer finds nonlinear relationships invisible to the human mind, nor a computer that runs automatically,” BlueCove’s Khein said.

According to eVestment, sector data in the US high yield market shows a consistent performance of quantitative credit strategies compared to traditional approaches over the past few years. This includes a return of 5.2% on average for actively managed quantitative strategies last year, compared to 5.5% for traditional managers. Quants outperformed very slightly in the toughest markets of 2020 with a return of 6.7%, while traditional managers outperformed them by two percentage points in 2019 with 13.8%.

Interest from the investment community certainly seems to be growing. Twenty-eight percent of asset allocators recently said they were looking to increase their investments in systematic credit over the next 12 months, according to a BNP Paribas survey of 47 allocators who invest or advise fund assets speculative assets worth $247 billion.

Banks are already considering the potential funding opportunities for these strategies given the amounts of leverage often required to meet return targets. Quantitative equity funds are already an important source of revenue for banks’ prime brokerage units.

“From a financial perspective, we are excited about the growth potential. These strategies require equal or greater leverage than quantitative equity portfolios, however, they have less data and may not be as liquid, requiring more in-depth margin analysis and development,” Marlin said. Naidoo, global head of capital introduction at BNP Paribas, adding his company had built such capabilities.

The speed at which systematic credit grows may well depend on how fast corporate bond markets continue to evolve. Despite all the advances in recent years, some note the tendency for fixed income liquidity to deteriorate rapidly when volatility rises – and the potential to hurt investors, especially those contemplating cross arbitrages. Barclays’ Gorelov said some funds had “emphasized one-name strategies” given CDS’s lack of liquidity compared to other markets like stocks.

But despite such bumps in the road, there’s little doubt about the direction of travel — or the opportunities investors are eyeing in the still largely undiscovered realm of systematic fixed income.