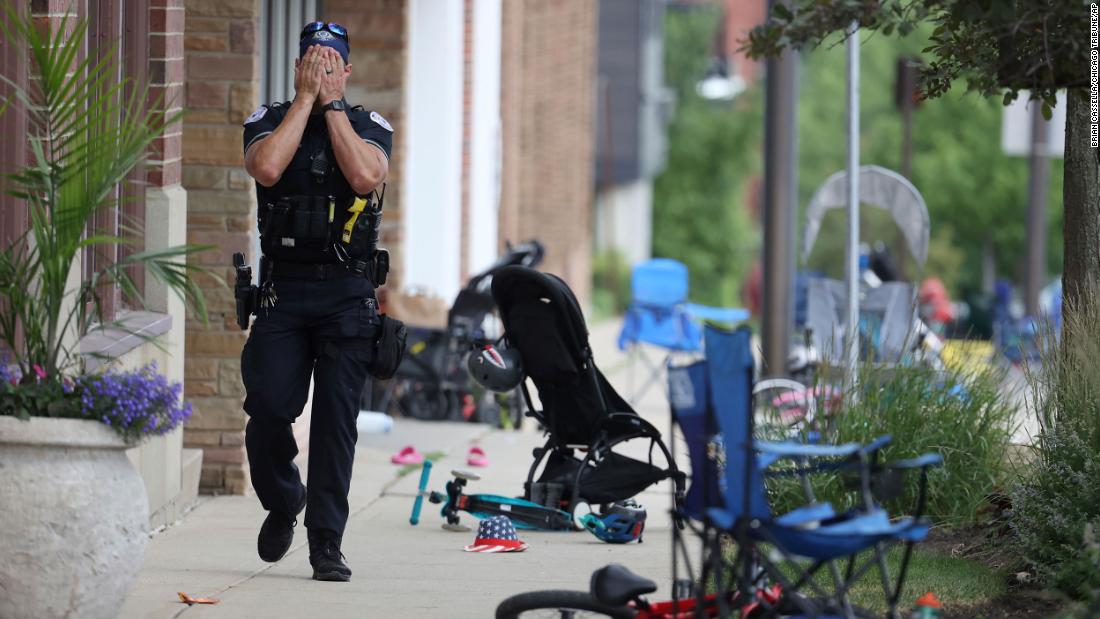 Robert E. Crimo III: What we know about the Highland Park shooting suspect

Robert “Bobby” E. Crimo III, 21, has yet to be formally charged in the shooting, which authorities said he allegedly carried out by climbing onto the roof of a nearby business and opening fire on the parade minutes after it started, sending the parade -spectators running for safety.

Investigators believe the suspect planned “this attack for several weeks,” Chris Covelli, spokesman for the Lake County Major Crimes Task Force, said at a press conference Tuesday. The suspect dressed in women’s clothing to conceal his identity, Covelli said, mingled with the crowd as they fled the area and went to his mother’s house.

Law enforcement has yet to establish a motive, but Covelli said there was no information to suggest the attack was “racial, religiously motivated or any other protected status.” There’s no indication anyone else was involved, Covelli said.

The suspect took his mother’s vehicle and a member of the community saw him, Covelli said. This individual called 911 and North Chicago Police conducted a traffic stop and took him into custody.

Police previously said Crimo was 22, but on Tuesday said he was actually 21.

Here’s what we know about him.

He legally obtained the gun used, the mayor told CNN

The suspect legally purchased the gun he used in Monday’s shooting, Covelli said Tuesday, describing it as a “high-powered rifle” that fired bullets at high velocity. The weapon, which he described as “similar to an AR-15,” was purchased locally, Covelli said, in the Chicagoland area.

Investigators believe he fired more than 70 rounds during the attack, Covelli said, and there is no indication the weapon was modified.

Crimo also legally purchased a second rifle found in his vehicle when he was apprehended, as well as other firearms recovered from his residence, which Covelli described as pistols.

Evidence of firearms was found on the roof of a business near the shooting, Covelli said Monday, describing the weapon as a “high-powered rifle”. At the time, authorities were working to track down the firearm to find out who bought it and its origins, according to Bureau of Alcohol, Tobacco, Firearms and Explosives spokesperson Kim Nerheim.

The accelerated gun trace was “a major investigative lead,” Covelli said Tuesday, and helped identify the suspect along with witness statements and community videos.

Nineteen of the 25 gunshot victims were treated and released, he said.

Police in Highwood, Illinois — the suspect’s hometown, just outside of Highland Park — have had no previous crime-related interactions with Crimo, according to Highwood Police Chief Dave Wentz .

The only contact the department had with Crimo was in a non-criminal incident where Crimo was present when he was underage, Wentz said.

“We literally have nothing on him,” Wentz said. “He wasn’t potentially involved in anything.”

The alleged shooter has released music on several major streaming platforms under the pseudonym Awake the Rapper, and he has apparently created and posted online music videos featuring disturbing lyrics and animated scenes of gun violence.

In a video titled “Are you Awake”, a cartoon animation of a stickman shooter resembling the suspect’s appearance is seen wearing tactical gear and performing an attack with a rifle. Crimo, seen with multicolored hair and facial tattoos, says, “I just have to do it. It’s my destiny.”

In another video titled “Toy Soldier”, a similar stick figure resembling the suspect is shown lying face down in a pool of his own blood, surrounded by police officers with their weapons drawn.

Law enforcement is reviewing videos posted online, Covelli said at Tuesday’s news conference, noting that police had not previously been notified. “We’ll watch them and see what they reveal.”

Several of the suspect’s online posts “reflected a plan and a desire to commit carnage long in advance,” Mayor Rotering said in an interview with NBC’s Hoda Kotb on “Today.”

“And it’s one of those things where you step back and say, what happened? How did someone get so angry and hateful,” she said, “for then go after innocent people who were literally having a family day?”

YouTube and Spotify have removed content related to the suspect from their platforms, the companies confirmed on Tuesday. They declined to answer questions about whether the content had been flagged or previously flagged for violating their respective terms of service. The companies also declined to say precisely when they removed the suspect’s content.

CNN has also reached out to Apple Music, Amazon Music, Tidal and Pandora with similar questions, but the companies have yet to respond.

His uncle says he saw no warning signs

Highland Park Mayor Nancy Rotering knew the suspect years ago when she was her wolf pack leader, she told CNN: “Many years ago he didn’t was just a little boy, a quiet little boy that I knew.”

“It breaks my heart. I see this photo and through the tattoos I see the little boy,” she said. “I don’t know what got him to this point.”

The suspect’s uncle, Paul A. Crimo, was “heartbroken” to learn that his nephew was suspected of being responsible for Monday’s shooting, telling CNN: “There were no signs that I saw who would make him do that.”

The suspect lived in an apartment behind a house in Highwood, Ill., owned by his father, said Paul Crimo, who also lives in the house. He last saw his nephew on Sunday evening, he said, sitting on a recliner in the house and looking at his computer.

“Everything was normal,” he said.

To the knowledge of Paul Crimo, his nephew didn’t have a job, he told CNN, although he worked at Panera Bread before the Covid-19 pandemic. Paul Crimo said he had never seen the suspect engage in any violence or disturbing behavior. He was also unaware of his nephew’s political views, describing him as a “quiet” person.

“He’s usually alone. He’s a lonely, quiet person. He keeps everything to himself.”

The suspect’s father and Paul Crimo’s brother, Robert Crimo Jr., have previously run for mayor, he said. “We are good people here, and to have this is devastating.”

“I’m so sorry for all the families who lost their lives,” said Paul Crimo.