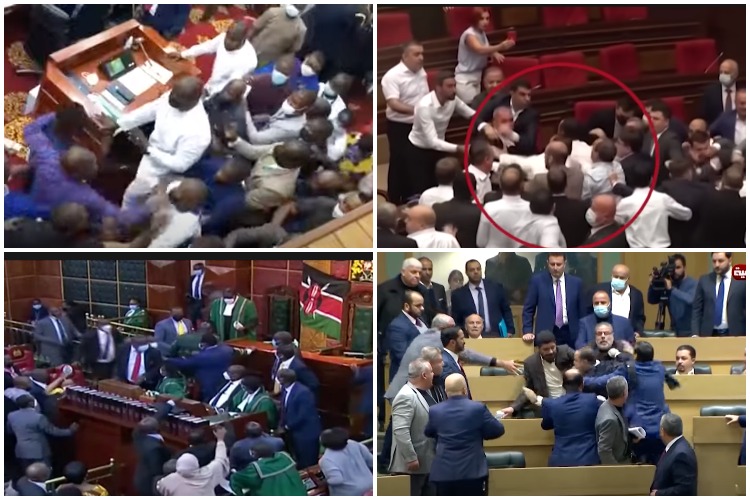 When lawmakers turned to boxers

The legislative arm of government is the one with the responsibility of making laws and they are expected to be a lot of jawbones in reaching compromises and making laws that benefit their constituents.

However, the situations in these sacred chambers can escalate into screaming matches and outright brawls.

In this article, we recount the times when lawmakers of different nationalities resorted to their fists instead of speaking in 2021.

Jordan’s parliament plunged into chaos on Tuesday with lawmakers throwing punches at each other after a discussion of a constitutional amendment that would mean greater rights for women heated up.

Video from the floor of the house shows a handful of lawmakers in a physical scuffle, threats and trade slurs. Even the Speaker of Parliament lost his temper when he resorted to yelling to manage the fray.

Kenyan lawmakers on Wednesday fought on the floor of the national parliament, while debating a controversial bill governing political parties ahead of next year’s elections.

According to local media, two rival MPs exchanged blows and one suffered an eye injury. Videos showed him demanding intervention from the president as his eyes bled.

Closer to us in West Africa, Monday, December 20, 2021, a debate in the Ghanaian parliament on a proposed tax on electronic transactions gave rise to a fight.

The government of President Nana Akufo-Addo had introduced a 1.75% fee on electronic transactions. The opposition was against the new levy which was to come into force on February 1, 2022.

On the Asian continent, lawmakers sometimes throw punches when they don’t know what to do with words.

A scuffle erupted on the parliamentary floor in August after a ruling party deputy called some of the country’s former defense ministers “traitors.”

This statement led to objects being thrown on the floor of the house, even as lawmakers became physical with each other.

In September 2021, opposition lawmakers interrupted the annual speech by President Su Tseng-chang. Their actions resulted in some jostling while others poured water on their opponents.

At the end of the day, Su could not deliver her speech.

The fights on the floor of the National Assembly are not new. On July 15, a scuffle broke out in the House of Representatives, as lawmakers debated the electronic transmission of election results, which is a major component of the Election Law Amendment Bill.

All rights reserved. This material and any other digital content on this website may not be reproduced, published, broadcast, rewritten or redistributed in whole or in part without the express prior written permission of PUNCH.